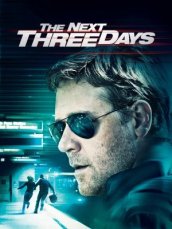 In The Next Three Days, Russell Crowe stars as John Brennan, a teacher whose wife, Lara, is convicted for the murder of her boss. Not convinced of her guilt, and having exhausted the legal options, Brennan begins developing a plan to break her out of prison. Writer-director Paul Haggis (Crash) twists a crime thriller into something akin to a heist film, relegating the wife’s guilt to secondary importance to explore the broader issue of control:

John Brennan: So, the life in times of Don Quixote, what is it about?
Female College Student: That someone’s belief in virtue is more important than virtue itself?
John Brennan: Yes… that’s in there. But what is it about? Could it be how rational thought destroys your soul? Could it be about the triumph of irrationality and the power that is in that? You know, we spend a lot of time trying to organize the world. We build clocks and calendars and we try to predict the weather. But what part of our life is truly under our control? What if we choose to exist purely in a reality of our own making? Does that render us insane? And if it does, isn’t that better than a life of despair?

Herein lies John’s conflict – does he chose the rationality of accepting the judge’s decision and despair or the irrationality of action for a life of happiness with his wife? If John is to rescue his wife he must live between these two worlds. Thus, he studies the prison, learns its routine, draws maps, develops a budget, analyses regularity of human activity, he builds “clocks and calendars”, as he searches for the key to smuggle his wife out of prison.

At the same time, the heist requires a great deal of what might otherwise be considered irrational behaviour for most ordinary citizens – he acquires illegal identification, weapons, creates a ‘bump’ key, suspending the ordinary regularities and moralities of his life. John is constantly presented with various choices, each of which would have massive consequences. For example, he considers robbing a bank for cash; he considers escaping town with his wife but without his son. He races off and nearly reverses over a young family: “You’re out of your mind! You don’t look!” the mother shouts. As John seeks to control one variable, another is sent off the scale.

As Lara declares her guilt to him in a bid to protect their son from being without both his parents, she drives a wedge between his resolve and his rational mind about what is right. Her guilt or innocence will either condemn or justify his actions in the viewer’s mind. Only with some measure of trust in her character does he proceed: I know who you are, and I promise you this will not be your life.

But isn’t Lara at least somewhat complicit in their predicament: she was angry, she was hasty, so that her fingerprints end up on a murder weapon – fire extinguishers don’t end up in the middle of a carpark for no reason. A moment of clarity might have saved her. Or, is Lara a victim of coincidence: the same day she has a fight with her boss a homeless person mugs the boss, and rain washes away the evidence which would corroborate her defence.

There is some small irony that filmmakers chose to tackle issues of control and  coincidence when everything in every movie happens for a reason – because the filmmaker wanted it there. Christianity would say that God stands in a similar relation to the universe as a filmmaker stands to a movie: He creates, he upholds, establishes governments in their place, and guides history to achieve his purposes. Unique among the worldviews is that God is also working all things for the good of those who love him (Romans 8:28-29).

And we know that in all things God works for the good of those who love him, who have been called according to his purpose. For those God foreknew he also predestined to be conformed to the image of his Son, that he might be the firstborn among many brothers and sisters.

All circumstances, including suffering, for the Christian are meaningful even if we don’t see it at the time. The challenge for us is to see and use our circumstances wisely. The death and resurrection of Jesus shows us what patience, forgiveness and love towards our enemies looks like – as irrational and backwards that may appear from the outside, but that is a reasonable response to Jesus (Romans 12:1-2). At the same time, a large part of loving our world is gaining a rational awareness and understanding of each others’ needs, and in so doing we might just save someone from a life of despair. We can’t control everything but we can control how we respond.